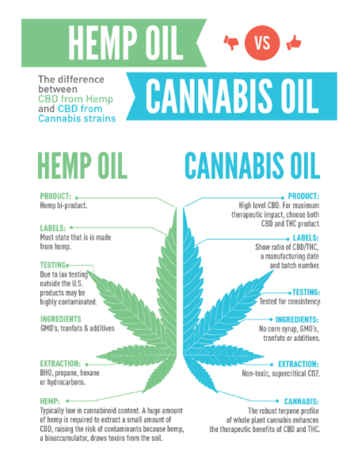 We recommend CBD-rich products made using only organic, whole plant cannabis because this offers the best safety profile and superior medicinal benefits.

Industrial hemp typically contains far less cannabidiol than CBD-rich cannabis strains so a huge amount of industrial hemp is required to extract a small amount of CBD. This raises the risk of contaminants as hemp is a “bio-accumulator”—meaning the plant naturally drawns toxins from the soil.

It’s against federal law to use hemp leaves and flowers to make drug products. Hemp oil entrepreneurs attempt to sidestep this legal hurdle by dubiously claiming they extract CBD only from hemp stalk before importing it to the United States, a grey area activity at best

Here is an article Written and Published by Martin Lee.of ProjectCBD.org

Published in the journal Pharmacology & Pharmacy (Feb. 2015), the article directly challenges one of the sacred cows of Big Pharma and the medical-industrial complex -- the notion that “crude” botanical preparations are inherently low grade and less effective than pure, single-molecule compounds.

Entitled “Overcoming the Bell-Shaped Dose-Response of Cannabidiol by Using Cannabis Extract Enriched in Cannabidiol,” the article is all the more noteworthy given the contribution of co-author Lumir Hanus, who was instrumental in the discovery of anandamide, the endogenous cannabinoid compound first identified in the mammalian brain in 1992.

Hanus and two Israeli colleagues from Hebrew University of Jerusalem surveyed the scientific literature and noted that during the past fifteen years numerous preclinical studies had focused on the anti-inflammatory effects of pure, single-molecule CBD in animal models of various pathologies, including rheumatoid arthritis, inflammatory bowel disease, multiple sclerosis, and diabetes. (See preclinical data regarding CBD.)

These studies showed that administration of pure, single-molecule CBD resulted in a bell-shaped dose-response curve, meaning that when the amount of CBD exceeded a certain point its therapeutic impact declined dramatically. “Healing was only observed when CBD was given within a very limited dose range, whereas no beneficial effect was achieved at either lower or higher doses,” the authors observed. This characteristic of single-molecule CBD — manifested as a bell-shaped dose response — imposes serious obstacles that limit its usefulness in a clinical context.

The Israeli team sought to determine whether the administration of a whole plant CBD-rich extract would also generate a bell-shaped dose-response curve when administered to mice. Or would cannabidiol extracted from CBD-rich Cannabis avoid this liability? “The aim of the present study,” the authors explained, “was to find a CBD source that could eliminate the bell-shaped dose-response of purified CBD.”

The scientists obtained a CBD-rich strain called “Avidekel” from Tikkun Olam, an Israeli medical marijuana producer. Referred to as “clone 202” in this study, Avidekel has hardly any THC and therefore is not intoxicating. The origins of Avidekel can be traced to Spain, where breeders developed several phenotypes of “Cannatonic” (as in “cannabis tonic”), including a strain that measures close to 20 percent CBD by dry weight with almost no intoxicating ingredients. (The same high-yielding CBD-dominant strain is known as “ACDC” in California.)

The Israeli researchers extracted CBD-rich oil from clone 202. The extract—consisting of 17.9 percent CBD, 1.1 percent THC, 1.1 percent cannabichromene (CBC), 0.2 percent cannabigerol (CBG), and “traces” of cannabinol (CBN) and cannabivarol (CBDV)—was given to mice to evaluate its anti-inflammatory and painkilling effect.

For comparative purposes, the scientists administered pure, synthetic CBD to another group of mice and assessed its anti-inflammatory and analgesic properties. They also compared the extent to which single-molecule CBD and whole plant CBD inhibited the production of tumor necrosis factor alpha (TNFa), a systemic inflammatory signaling molecule. Dysregulation of TNF-alpha production has been implicated in several diseases including cancer, Alzheimer’s, clinical depression, and irritable bowel syndrome.

But a different dose response pattern was observed when the clone 202 extract was administered to mice. Rather than showing a bell-shaped curve, where a therapeutic effect could only be achieved at a certain concentration of pure CBD, the whole plant CBD-rich extract caused a direct, dose-dependent inhibition of pain, inflammation, and TNFa production. “In stark contrast to purified CBD,” the Israeli team reported, “the clone extract...provided a clear correlation between the anti-inflammatory and anti-nociceptive responses and the dose, with increasing responses upon increasing doses, which makes this plant medicine ideal for clinical uses.”

Moreover, the Israeli researchers found that a small amount of CBD in the clone extract was needed for significant pain relief compared to the much larger amount of pure CBD required to achieve the same analgesic effect. And whereas pure, single-molecule CBD precipitated a dramatic drop in efficacy if more than a specific dosage was administered, an “overdose” of whole plant CBD-rich extract did not undermine its therapeutic potency. When greater than an optimal dose of the clone 202 oil was administered, its effectiveness leveled off, suggesting that a medicinal plateau had been reached.

The Israeli study found that Cannabis clone 202 extract “is superior over CBD for the treatment of inflammatory conditions.” The greater efficiency of the whole plant extract might be explained by additive or synergistic interactions between CBD and dozens of minor phytocannabinoids and hundreds of non-cannabinoid plant compounds. “It is likely that other components in the extract synergize with CBD to achieve the desired anti-inflammatory action that may contribute to overcoming the bell-shaped dose-response of purified CBD,” the Israeli team surmised.

The scientists also felt it was important to examine how the CBD-rich Cannabis extract compared with commercial painkillers and anti-inflammatory drugs. They found that both pure CBD and the clone 202 extract exhibited greater anti-inflammatory potency than aspirin. Aspirin, but not tramadol, registered a slight inhibitory effect on TNFa production, which was negligible in comparison to the strong inhibitory effect of pure CBD and clone 202.

The key finding that CBD in the presence of other Cannabis components improves the dose-response is supported by recent reports documenting the anti-proliferative effect of cannabidiol on tumor cells and the inhibitory effect of CBD on bladder contractility.

“A lot of research has been made to isolate and characterize isolated single constituents of traditional herbal medicine to find their rationale for therapeutic uses,” the Israeli team concluded. “However, our data together with those of others provide legitimation to introduce a new generation of phytopharmaceuticals to treat diseases that have hitherto been treated using synthetic drugs alone. The therapeutic synergy observed with plant extracts results in the requirement for a lower amount of active components, with consequent reduced adverse effects.”

*All CBD and Hemp information on this page was sourced from ProjectCBD.Org